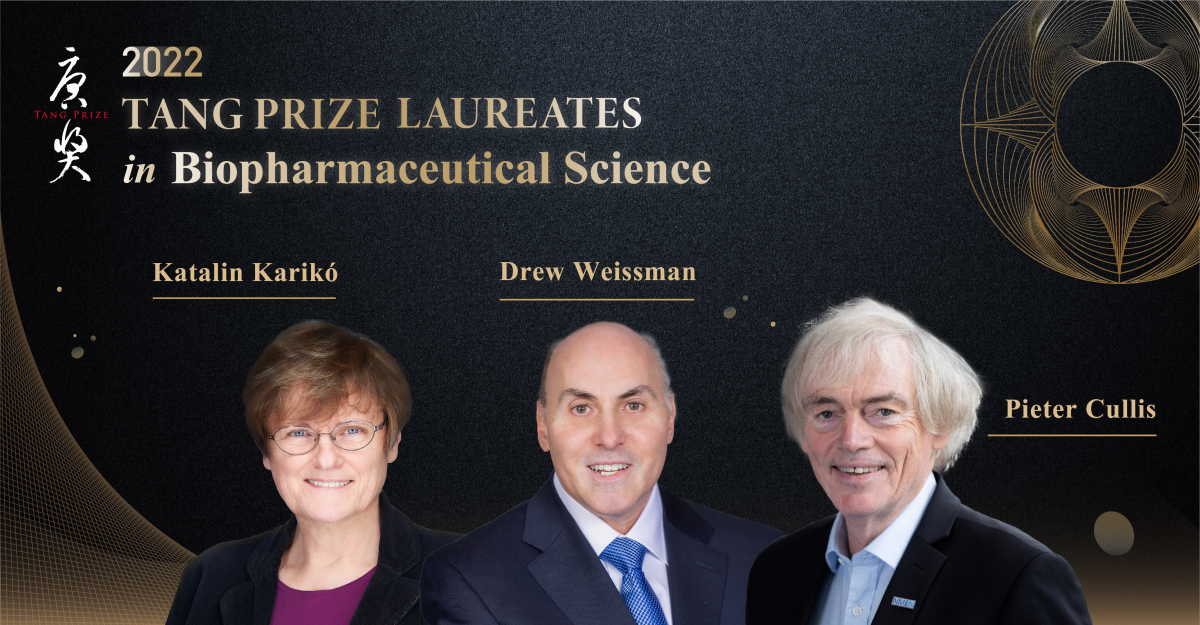 For their contributions to the development of an mRNA-based COVID vaccine, NMIN’s Founding Scientific Director, Dr. Pieter Cullis (UBC), together with his colleagues Drs Katalin Karikó (University of Szeged) and Drew Weissman (University of Pennsylvania), have been jointly awarded the 2022 Tang Prize in in Biopharmaceutical Science.

The prize recognizes original biopharmaceutical or biomedical research that has improved human health by advancing the prevention, diagnosis and/or treatment of major human diseases. In 2018 and 2020, two former Tang Prize laureates went on to win Nobel Prizes.

It pleases me a lot not just because of the honour I am getting, but it reflects on all the people I have worked with. The award is really being given for the work of literally hundreds of people that I have had the pleasure to work with over the last 40 years.

The prize committee indicates that Dr. Cullis and colleagues were selected “for the discovery of key vaccinology concepts and approaches, leading to the successful development of mRNA-based COVID-19 vaccine.”

In particular, Dr. Cullis is being recognized for “[creating] nanoparticles composed of pH-sensitive, cationic lipids that can induce the formation of non-bilayer structures and can carry DNA and RNA-based anionic macromolecules, [allowing] these nanoparticles to encapsulate and store nuclear acid-based drugs as well as release them into cells”—something that has been “critical in the development of RNA-based vaccines, as RNA is quite unstable and difficult to efficiently deliver into cells.”

Drs Karikó and Weissman, on the other hand, were recognized for  “[finding] a way to reduce the immunogenicity of mRNA,”  modifying its nucleosides so that when the mRNA is introduced into a patient it does not elicit an immune response leading to inflammation.

For these contributions, the same trio has already also been jointly awarded the  2021 Prince Mahidol Award,  the inaugural VinFuture Grand Prize, and the 2022 Canada Gairdner International Award.

The Taiwan-based  Tang Prize, awarded in four categories, was established in December 2012 by Dr. Samuel Yen-Liang Yin, chairman of the Ruentex Group. An independent committee of renowned experts select the awardees and a cash prize of approximately US$1.7 million is allocated to each category of prizewinner.